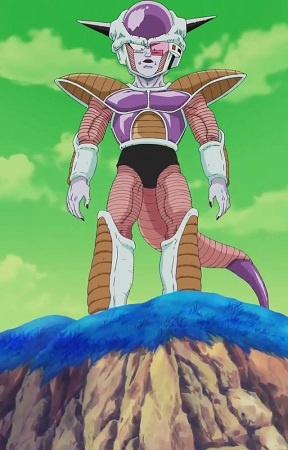 This is what it’s all been building up to. The Namek saga comes to a close with the climactic showdown between the tyrant Frieza and the heroes from Earth. Season 3 of Dragon Ball Z is regarded by many to be the pinnacle of the show. Future seasons maintain the intensity of battle, but Season 3 set the standard. This is where everyone sees the heart and soul of the show.

Prepare yourself for a long battle, because the fight against Frieza takes up the entire season. His goons are of no more use here. Opposing forces take their turns at seeing how they measure up against the tyrant but, like the past two seasons, the viewer is just waiting for Goku to show up… and he takes his sweet time. And when you start hearing people say something will take “minutes”, don’t believe them. A “minute” to them is several half-hour episodes.

There are occasional breaks in the intensity of the fight to deal with lesser plots going on in different parts of Namek, back home on Earth, or on King Kai’s planet, providing some much needed comic relief and change of pace and scenery.

Transformations are one of the great pleasures of this show, and Season 3 is most famous for that element. There are impressive demonstrations of landscape destruction during the battles, which would be upsetting if it was Earth, but being another planet it’s okay to be impressed.

Goku reaches new levels of badassery in this season, and shows some inspiring examples of how to respond to evil. His self-promotive words may offend though, depending on which version you’re watching. He puffs himself up a bit, but there are versions where he gets less carried away. The comedic Abridged version by Team Four Star paraphrased it as “I am the Alpha, and the the Ameega.”

Vegeta’s health concerns, raised at the close of Season 2 as an additional cliffhanger, are never addressed. So if you were hoping for closure on that then you’re tough out of luck. He just becomes fine all the sudden.

To save you some confusion, I’ll explain that the guy who makes a cameo appearance in Episode 97 is not Cui. He looks and dresses exactly the same, and says that his entire race was wiped out, which would imply that he’s Cui because if he’s the only one left then nobody else could look like that. But he’s not Cui. Then another member of his race enters the room. …I suppose that didn’t really help to make things less confusing.

In an unexpected turn, Roshi at one point says “God bless him” and “All we can do is pray”, which might offend other groups.

Violence: Same as what youd’ve come to expect by now. The only notable thing might be the bloody, torturous and drawn out impalement attack that Frieza uses on someone. That’s not the only person he takes the opportunity to torture though. He’s a sick bugger.

Sexuality: While grabbing Chi-Chi to stop her from flying into space, Roshi rubs his face against her butt. He is then bashed in the nose.

Nudity: Vegeta’s butt. That’s all. There are some close-up images that might concern people, but it’s just a close-up of Frieza’s tail. Don’t panic.

Occult References: In Episode 103 “Pathos of Frieza” one of the characters demonstrates a form of divination called “Firemancing.”

Quote of the Season

“I wouldn’t want to be me right now, but I don’t have a choice.”

Cooler is one of my favourite character designs, so I wish I had more praise for the movie as a whole, but I don’t. There are some impressive moves, but the flow of both the plot and 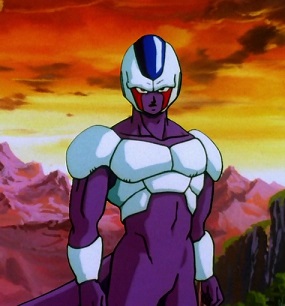 fight choreography comes at a boring pace. The choice of battleground seems unfitting for the kind of villains the heroes face this time around.

The premise of Frieza having an older brother interested me, but coming right after Season 3 some people might be less enthusiastic over the opportunity of seeing more of that particular species. People might be happy to know that the fight against Cooler doesn’t take anywhere near as long as the fight with his brother. He reveals his trump card surprisingly quick. He’s also got his own version of the Ginyu Force, called “Cooler’s Armored Squadron”, who are not as stylish.

Given the way the movie begins, it might be less jarring to watch it part way through Season 4, but the power levels of certain characters in this movie, plus Gohan’s hairstyle, means the best time to watch this would be right after finishing Season 3.

Yo. I'm a 30-something Christian guy and published author with a love for gaming, fantasy and sci-fi. I blog about pop culture, living as a young Christian guy, and living with A.S.
View all posts by benjaminfrog →
This entry was posted in Dragon Ball, Pop Culture, Review and tagged Cooler, Dragon Ball, Dragon Ball Z, Frieza, Goku. Bookmark the permalink.