Cell promised us a show, and he delivers with Dragon Ball Z – Season 6. The Android Saga and Cell Saga come to a close with the climactic Cell Games. The season takes a few episodes to get to the actual tournament, equivalent to ten days for our heroes, and even then the games have a slow start, but once the real battle kicks in it delivers the best action sequences, fight choreography and light show that you’d come to expect from Dragon Ball.

This season sees the introduction of Mr. Satan, who in some versions of the show is called only by his first name – Hercule. The name could make some Christian viewers uncomfortable. Even though the character is presented as a complete buffoon, he is adored by pretty much everyone on the planet (in Dragon Ball’s earth), and the legions of fans chanting “Mr. Satan!” and praising his heroic feats can sometimes make Christian audiences uneasy.

Why the name? Well the character is obviously a jab at American hero-types like Hulk Hogan and Chuck Norris, and I know there are some countries that call America “The Great Satan.” I don’t know if that’s the connection though.

This season continues the themes of father-and-son relationships that started with the previous season, but with a positive twist with the focus shifting from Vegeta and Trunks to Goku and Gohan. There are a number of deep insights into father-son relationships and parallels with the way God relates to us. I already did a blog post about that titled Bible Study Z, so I won’t repeat it all here. I would warn though that the post contains spoilers from the season. In short, all of the build up in the past 5 seasons of the show regarding bringing up Gohan into a warrior come to a culmination in this season, and as a follower of the show it is a powerful thing to witness.

I’m sure people with this sensitivity are already warned about this before watching such shows, but this season in particular compelled me to mention that anyone with a history of epilepsy should probably consult a doctor before watching this.

Mysticism: Hercule does a meditative chant before destroying tiles, which doesn’t seem to help. Baba rambles at her crystal ball to make it show stuff.

Violence: There is a number of decapitations and similar bodily divisions.

Inappropriateness: Somebody flips Cell the bird.

Also Caroni’s pelvic thrusts as he shows off. He’s one of Hercule’s students and seems to be based on “The Heartbreak Kid” Shawn Michaels. There is even a cowbell noise to accompany his thrusts. I had a joke about that which I won’t repeat here, but it reminded me of an SNL skit.

(SPOILER ALERT) One thing I would add to what I’ve already said in Bible Study Z is that, Christians have a hard time reconciling God’s promise to never forsake us with the fact that he often feels distant, but taking from the example of Goku and Gohan, I’ve realized that there is a difference between forsaking and keeping a watchful distance. Goku never abandons Gohan, although it may feel like he did, he is near, he is watching, and he is trusting. (SPOILER ENDED)

Quote of the Season

“Is it too much to ask to have a normal dinner where we don’t smash glasses and bend silver-wear and break all the furniture!” – Chi-Chi

I know, I haven’t put these movies in the right order, and here’s why…

Unfortunately, Return of Cooler contains a pretty big spoiler that isn’t supposed to be revealed until Episode 173, and I didn’t want to make people wait for a movie any longer than necessary. The only news flash in Super Android 13 is the fate of Dr. Gero, which is revealed at the tail end of Season 4, and which is given a bloodier re-enactment in this movie. Technically, Super Android 13 could be watched any time after Episode 134 without spoilers – I only recommend waiting as long as I do (between Episodes 169 and 170) because part of the movie plays off of something that happens at the end of Season 5.

The film presents a fortunate opportunity to see what happens when some assassination droids actually get to Goku and present a challenge. No other androids get the chance, unless you count Nineteen who only survived as long as he did because of the heart virus. Androids 14 and 15 work well together and make a formidable team. In a franchise that focuses mainly on one-on-one combat it is rare to see good team-based fight choreography.

One annoyance of the post-Frieza DBZ movies is that in order to keep the drama going it takes the heroes a long time to remember that they can turn Super Saiyan. Until then they tend to get horribly beaten and not understand why.

Despite minor flaws, this is still one of the more enjoyable DBZ movies. It also contains the most terrifying image of an angry Goku that I’ve ever seen.

I don’t usually do this but…

Quote of the Film

“Don’t you lecture me with your thirty-dollar haircut! Goku dies!” 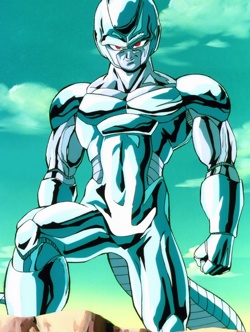 The return of one of my favourite villains. Unfortunately this movie has a lot working against it. The action is alright, not great, but the overall pace of the story is fairly mellow and quiet. It has a pretty epic opening, and an interesting setting but overall it ends up feeling soft. It’s unfortunate that Cooler wasn’t given more interesting fighting environments in his movies. I’d frankly had enough of Namekian culture ages ago. More combat within the Big Gete Star itself might have provided a better setting.

The power stats of the various heroes positions this movie somewhere near the beginning of the Android Saga, and I would’ve recommended watching it there, if not for a pointless spoiler at the beginning that forces the audience to wait until sometime in Season 6. On account of that, my recommended time to watch this movie is between Episodes 173 and 174.

This is possibly the best of the Dragon Ball Z movies, even if only for the fact that this one actually has a kind of a story happening (as opposed to “I’m a bad guy. Let’s fight.”) This movie takes the opportunity to delve a bit deeper into the old Saiyan lore, which I think fans are still hungry for, and takes lessons from Seasons 4 and 5 by focusing on elements of mystery and getting the audience to wonder what exactly is going on.

But the higher caliber of storytelling is not the only thing this DBZ movie has going for it. Broly is also the most popular of the franchise’s movie villains, with a personality and history that appeals to Japanese audiences, along with an appearance and brute strength that appeals to American viewers.

On top of that, the action sequences in this movie show Dragon Ball at the top of its game. As a whole package, Broly, the Legendary Super Saiyan is the most complete of the DBZ movies. A few others come close, but don’t quite match it.

There are only a few complaints I can name.

It is uncharacteristic for Vegeta to wuss out like he does when he realizes what he’s up against. He would normally press on and get himself killed rather than admit that he’s not the strongest entity in the universe.

I am also confused over the timeline. Vegeta has said that he heard tales of the Legendary Super Saiyan when he was a child, but he is already a child (maybe 8ish) when Broly is born, which is the same day that the Saiyan homeworld and all its inhabitants are destroyed. Unless he’s thinking that Broly is the reincarnation of the ancient Super Saiyan?

There is a lot of comic relief put into this movie to balance the fact that it’s a darker and often more disturbing tale in the Dragon Ball universe, and the relief comes at the oddest times and occasionally throws me out of the movie.

Violence: In addition to the violence you would already expect, there is a more disturbing visual of baby Broly being stabbed with a knife. It is only a silhouette, but just the idea is upsetting enough.

Recommended viewing time is between Episodes 173 and 174 – same as Return of Cooler, however I would definitely recommend getting through Return of Cooler first, because anything after Broly would be a let-down.

This film is an uncommonly perfect fit for the series. You could actually watch this right between Seasons 6 and 7 (Episodes 194 and 195) with perfect flow. Every character is exactly as they left off at the end of Season 6. It’s like someone actually paid attention to the show this time, which made my job a lot easier.

(The rest of this review contains some minor spoilers from Season 6.)

A unique feature to this film is Teen Gohan starring as the main hero. It’s the only time you’ll see this before the series moves on to the next stage of the different characters. It doesn’t last long, but it’s fun while it lasts.

In terms of action and originality, the movie starts off better than it finishes. The best DBZ movies tend to come up with a victory scenario that’s unique to the story, but Bojack Unbound simply repeats what we’ve just seen in the show. So it ends with a whimper.

Some good news is that Future Trunks is back for a visit, which makes it seem like he should come back more often, but this is the only time that he does. Roshi chases after women as usual, but I have nothing specifically illicit to report this time.

Yo. I'm a 30-something Christian guy and published author with a love for gaming, fantasy and sci-fi. I blog about pop culture, living as a young Christian guy, and living with A.S.
View all posts by benjaminfrog →
This entry was posted in Dragon Ball, Pop Culture, Review and tagged Android 13, android saga, Bojack, Broly, Cell, Cell Games, Christian review, Cooler, Dragon Ball Z, Gohan, Goku, Hercule. Bookmark the permalink.