Symbolic Heroes can be among the most difficult types of heroes to write, at least in a way that makes them likeable, and I personally avoid them like the plague. The reason is because these characters are intended to represent or symbolize a particular thing by their actions, powers, strength of character and so on. When a character represents something they therefore don’t have permission to do anything that goes against whatever it is they represent. The common results are characters who have no personality. They have no flaws. They make no mistakes. They have no bad days. In other words – they’re unrelatable.

The biggest examples of these kinds of heroes are types like Superman, Captain America and Wonder Woman. In recent films, Captain America has been given a lot more room to be himself (himself being Steve Rogers) but back in the day he wasn’t allowed to make mistakes. Superman has had this issue throughout his whole career.

Wonder Woman’s issues are different. Because she is supposed to represent all of womankind, she is therefore not allowed to do or be anything contrary to what women are like. The problem is, every woman is different. So fans complain about Wonder Woman not being accurate to the way real women are, and then when the writers change her according to what half the fans say, they get complaints from the other half saying “That’s not the way women are either.” As a result, Wonder Woman has gone through so many changes over the years that it’s actually laughable. Does anybody even know who Diana really is?

(I speak from what I’ve seen so far in television and films. I haven’t yet seen the new Wonder Woman movie or heard any reviews on it, so I can’t yet speak to whether or not the writers were successful with this latest version of the character.)

One (of many) reasons why Batman tends to be more popular than Superman with modern audiences is because Batman doesn’t have to represent anything other than Batman. If it’s what Batman would do, then it’s what Batman does. The only complaints from fans are due to writers not having a firm grasp on who Batman is as a person, and even that happens often enough.

Is there a solution? I think there is at least one – possibly more.

I think one solution is this: just give the character some flaws and get it over with. Even representative characters still have to be characters, and characters are people, and people – if they’re true to life – are flawed. Bring their quirks out into the open as quickly as possible. The sooner the audience comes to recognize the character’s flaws, the less bothered they will be by building up expectations of perfection and then having those expectations broken later on.

When I wrote ‘The Kingdom’ I was very intentional about bringing the princess’s character flaws out into the open long before her symbolism becomes apparent. That way she’s a person first, and a representative second. Her flaws stay with her throughout the story, even after readers begin to feel that she represents something; but by that point it’s okay in the reader’s mind, because Nevaeh is not that thing, she is just a character who has some symbolic similarities with that thing. 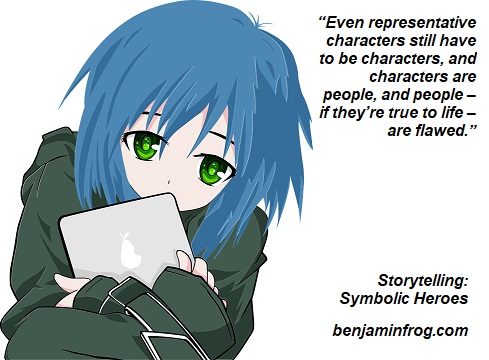 In my next post we’ll start discussing how to write Villains, starting with how to make sure your villain is believable.

For more on these and other writing topics, The Storyteller’s Handbook is available for purchase now.

Yo. I'm a 30-something Christian guy and published author with a love for gaming, fantasy and sci-fi. I blog about pop culture, living as a young Christian guy, and living with A.S.
View all posts by benjaminfrog →
This entry was posted in Pop Culture, Storytelling, THE KINGDOM, Writing and tagged Batman, Storytelling, Symbolic Heroes, Wonder Woman, Writing, writing Heroes, Writing Women Characters. Bookmark the permalink.